A recent thread on Digital Point Forums concerns the recent appearance of logo images in Adsense ads. It appears that [tag]Google[/tag] is testing using small logos in place of the text verison of ‘Google’ in the signature line ‘Ads by Google’. I grabbed the examples shown here from the Google ad in the sidebar. In these cases, the logo doesn’t affect blending because the background is white. However, several examples shown by bloggers in the forum look quite gawdy. Even the ‘rainbow’ colored logo has appeared in AdSense ads. 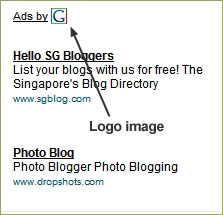 Blending is the key to success with Google [tag]AdSense[/tag] as it reduces ad blindness. Google allows publishers nearly complete control over colors in the AdSense layouts. From looking at the examples posted in the Digital Point Forum, it appears as if the entire signature line is an image with a white background. Yikes! What are they thinking?

Does Google really need more branding? Poor implementation of logo images will destroy ad/theme continuity reducing ad click-thru-rates. I am sure Google will find this out during testing and either make the background transparent (see the comment below) or go back to the text link. I vote for the latter!