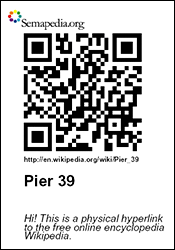 The example shown here is the semacode tag for the Pier 39 (San Francisco) page at [tag]Wikipedia[/tag]. A visitor to Pier 39 could photograph the tag (presumably placed on an information kiosk) using a semacode enabled camera phone, then be automatically taken to the Wiki Pier 39 page to retrieve information. The [tag]semacode[/tag] could conceivably be placed in guidebooks, newspapers, and even on T-shirts.

There are a number of competing 2-dimensional camera phone barcode standards on the market today (see previous post). Semacodes look remarkably similar to [tag]QR Codes[/tag]. However, [tag]semacodes[/tag] are based upon Datamatrix Code which is distinct from QR Code. It is clear that in a few years a standard will emerge that will be built-into camera phones worldwide.